During any given year, there are more than 44 million Americans (21% of the adult population) who provide unpaid care to an elderly or disabled person 18 years or older. Altogether, informal caregivers provide 80 percent of the long-term care in the United States. Sixty-one percent of caregivers are women. – womenshealth.org

Informal caregivers (unpaid family or friends of seriously ill loved ones) provide more care in the home than the federal government provides in all settings combined. – Family Caregiving Alliance

Nearly 44 million Americans are taking care of an older family member at any given time. AARP Public Policy Institute and the United Hospital Fund found that in recent years, the role of family caregivers “has dramatically expanded to include performing medical/nursing tasks of the kind and complexity once only provided in hospitals.” In fact, nearly half (46%) of family caregivers reported performing such medical/nursing tasks, three-quarters of those said their tasks included giving injections, administering intravenous fluids or otherwise managing medications. – www.aarp.org

Most older persons with long-term care needs—65%—rely exclusively on family and friends to provide assistance. – U.S. Administration on Aging

Estimates of the percentage of family or informal caregivers who are women range from 59% to 75%. – National Alliance for Caregiving, & AARP (1997). Family caregiving in the U.S. National Survey 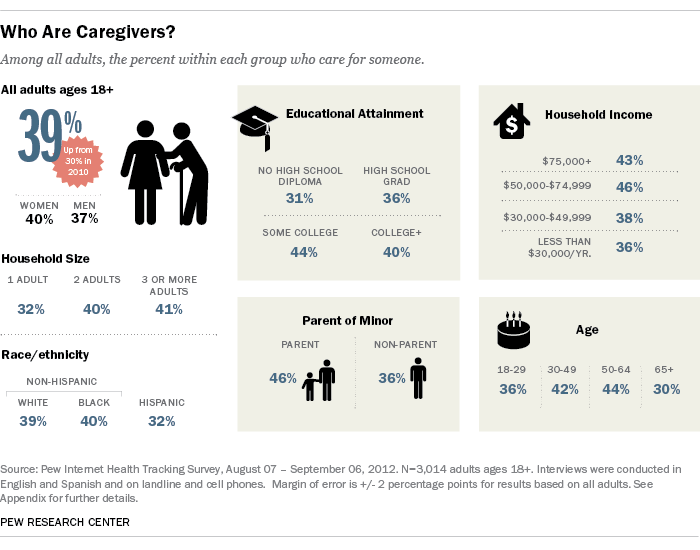 Caregiving touches every segment of the population. Men and women are equally likely to be caregivers. People of all age groups provide care for loved ones, with a slightly higher percentage of those ages 30-64 saying they do so. Caregivers are more likely than other adults to be married and to be employed full time.

They are also more likely than non-caregivers to have gone through a recent health crisis or to have experienced a significant change in their physical health (including positive changes, such as quitting smoking).

This finding dovetails with clinical studies showing that the stress associated with caregiving has an independent, negative effect on people’s health.

Of those who manage medications, 18% say they use online or mobile tools, such as websites or apps, to do so, which translates to 7% of all caregivers. College graduates are the most likely group to use technology to track medications. Otherwise, there are no significant differences among caregivers along age, income, or ethnic lines.

An aging population and a rise in the percentage of people living with chronic conditions means that the United States will need to increasingly rely on family caregivers to provide front-line health care. This study presents evidence about how caregivers currently gather, share, and create health information and support.